Part of fixing frozen water pipes is learning how different pipes act when they freeze. Every year I get calls to repair sections of pipe that froze and split in cold weather. After thirty years of plumbing, I've seen what cold weather can do to most kinds of pipe. Here's a description of how various kinds of plumbing pipe are damaged by a hard freeze.

Frozen galvanized pipe will rarely split along its length. Instead, the expanding ice inside will push along the pipe till it encounters a Tee or 90 degree bend. There it will meet the force of the ice flowing toward it from the other branch or branches.

The back of the tee or 90 will split and push out until there is a gap between the sides of the opening. The harder the freeze, the larger the gap. A 1/4” gap is about normal.

Galvanized pipe has another problem, the rust lining the inside of older iron pipe breaks free when ice crystals get into the rust and expand it away from the inner wall of the pipe.

When the frozen water pipe thaws, all the rust that is now loose in the pipe, rushes toward the first faucet that is opened downstream. If you've had a freeze in your galvanized system, the first faucets you operate should be those that are easy to clear of rust, or repair. 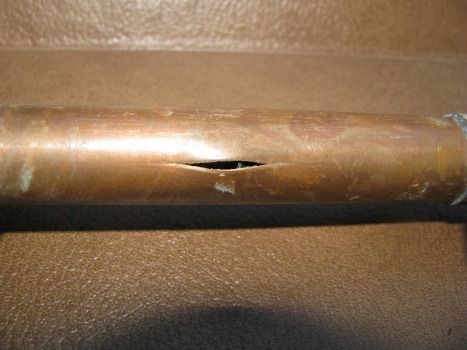 Frozen copper pipe splits open anywhere the force is greatest... along the pipe or at the fittings.

Hard-drawn copper won't expand, so repair fittings can be installed close to where the splits have been cut out.

Soft (roll) copper may expand. It may not split the first time it freezes, or it may. You may need to cut back to pipe that has never frozen in order to force fittings onto soft copper when repairing those frozen water pipes. The colder it gets, the closer the splits in copper pipe will be to each other.

PVC and CPVC act in about the same way when they freeze. Both get brittle in cold weather. They both fracture anywhere they freeze on either the pipe, fitting, or adapter. When PVC and CPVC frozen water pipes stay frozen long term or suffer a hard freeze they split along their length from fitting to fitting, ruining whole sections of pipe.

In normal conditions you cut PVC and CPVC with a snip, but if you are making repairs on those systems and it's very cold, use a saw to cut it. The snip may produce more of a controlled fracture than a cut.

PB pipe (brand name Qest Pipe) is said to be freeze resistant, not freeze proof. PB was the first of the flexible pipes to be used widely in American homes. There are several generations of fittings and clamps, but the pipe remained the same while it was on the market for residential plumbing.

The first generation was PB fittings with aluminum crimp rings. It was supposed to withstand some freezing and continue being fully serviceable, and that may be true of the pipe.

The problem is this- the ice that forms in the fitting expands not only the fitting, but the crimp ring as well. Once those frozen water pipes and fittings return to their normal size, the crimp ring would no longer give a secure hold. Most of the PB failures I have seen in my area have been do to the pipe no longer being connected to the fitting.

Later systems used copper crimp rings and brass fittings. Be cautious with PB in cold weather, especially if yours has aluminum rings. Don’t let those joints freeze at all.

If it does freeze and you want to thaw it, mind your heat. It's possible to damage the pipe wall with too much heat. Use nothing hotter than a hair dryer. Keep the dryer heat moving... don’t hold it in one place for too long.

PEX is claimed to be freeze- resistant, not freeze-proof. If your PEX pipe does freeze, it may thaw again with no damage to the pipe and fittings.

That being the case, be careful you don’t damage it while trying to thaw it, especially if it will thaw itself  with no consequences. Thaw PEX pipe with warmth, not heat. If you notice a paraffin odor, stop what you're doing! Just because there is ice in the pipe does not mean it can’t melt on its surface.