A toilet Auger, also known as a closet auger, is a tool made specifically to snake a toilet. I want to talk about the advantages, disadvantages, and tips for using an auger instead of a plunger when clearing a plugged toilet.

When I am called to clear a plugged toilet the two tools I grab are a closet auger and an empty bucket. Almost universally someone has already exhausted the possibility that the toilet can be cleared using only a plunger. That is one good reason to not even try using a plunger, there are a few others. It is unlikely that a plunger will extract a foreign object from a toilet, but a toilet auger very well might. I would rather extract an object from the drain system than force one into it. Frankly, I think it looks more professional to use an auger to snake a toilet and one is less likely to have a client say, "I could have done that."

The empty bucket lets me remove the tool from the house without dripping toilet water everywhere I walk with it. 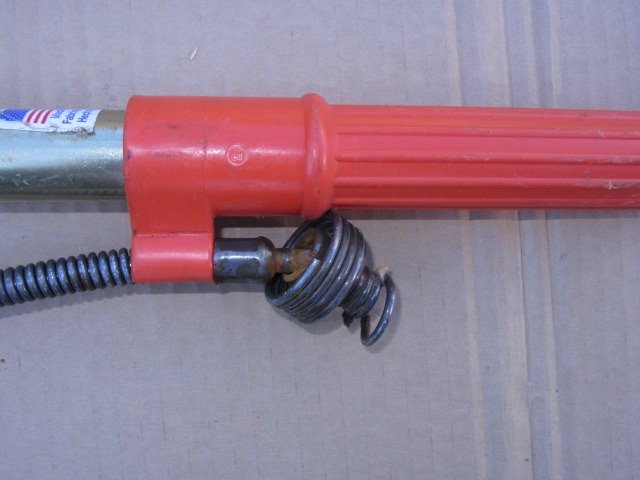 There are a few basic choices four basic types of head on toilet augers:

There are also a few feature options to choose from.

I have two augers on my truck, a closed coil fixed head and an open coil drop head. Both are made by General Wire, both are extendable, and both have steel cable cores. The extendable feature allows the tool to travel beyond the toilet into the drain pipe. I make sure the toilet is NOT connected to a lead pipe drain before I allow the cable or head to go beyond the china toilet. All of my drain cables are the type that have twisted steel cable inside the round coil snake. That feature not only extends the life of the tool, it helps prevent the snake from doubling over on itself in a drain. A toilet auger tied in a knot inside the trap way of a toilet sounds like buying a new toilet and a new tool to me. The best reason I can give for buying a pro grade closet auger is that every now and then I clear a toilet where the home owner has already tried to clear it with a small and flimsy auger. My job requires more than the right knowledge, it requires the right tools.

How to Use a Toilet Auger

It's time to talk about how to properly use a toilet auger. First draw the cable back into the tool so that only the head protrudes from the steel tube. Insert the tool into the trap way opening and angle it back so that the head is aimed up into the drain. Not only does this position place the tool at the best advantage, it keeps the steel from leaving marks where they will show. There should be a rubber guard on the steel tube to protect the china from the steel. Used properly the tool can clear the toilet while leaving no visible marks.

Next, turn the handle while pushing the cable further into the trap. If the cable travels through and clears the plug you are done and have only to test the toilet and clean up. Toilet traps however are not always like curved pipe inside, some open into square voids inside at the top of the trap. These boxlike areas can make the auger seem to dead end in the trap. Old style five gallon bowls are especially good for that. One thinks the head has encountered the plug but it is merely not progressing into the lower portion of the trap. It is then that a drop head auger is the right tool. One usually turns the auger handle so that the hook, if there is one, grabs. It may be necessary though to reverse in order to make the tool advance. Some toilets seem to be impossible to auger, even for an old hand. What one should not do is create great tension in the tool. If it gets hard to turn back off and try again. Change your angle or reverse direction.

Once the auger is fully into the trap I usually let some water down from the tank. Not a full flush, but enough to let me know if the trap is cleared. This also helps clean the cable before a draw it out of the trap. If the water goes down easily remove the tool and try another partial flush. If that drains as it ought to try a full flush. After that lay toilet paper on the water in  the bowl and flush again. Do the toilet paper test three times, if the paper does not build up and slow the drain there should not be any further problem. If it does, there is an object in the bowl yet.

One more note on toilet augers. Not all toilets are easy to auger... some are quite hard to get an auger through. It has to do with the way the manufacturer casts the water channel and trap-way. Some are rather tubular in nature, while others are boxy inside with large square voids.

It is not always easy to know if your closet auger is hanging up on an object lodged in the trap, or is just unable to negotiate the trap.

If you cannot clear the toilet with a toilet auger you may have to read my page, How to remove a toilet.

Back To Plumbing Tool