You may have lead pipe in your home if it was built or remodeled before 1925. We are talking about waste and vent plumbing pipes of course. The reason for the guess about the dating is that there's always an old holdout who loves to do it "the old way" years after everyone else has given it up as obsolete.

The drains plumbed with lead that I'm referring to here are specifically drains serving toilets, lavatories, tubs, utility sinks, and sinks in the butler's pantry. They are 1-1/2” ID pipe, except the toilet which is 4”.

In the early systems up until the mid 1920s, the drains from the tub and lavatory (sink) were joined to the toilet bend's 4” lead by what is referred to as a "wiped joint". 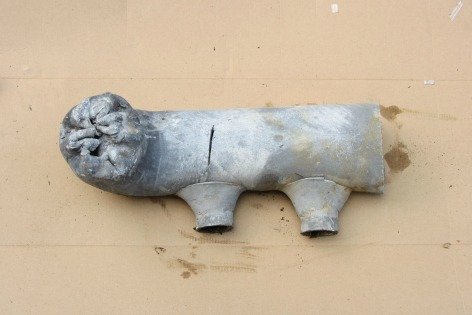 This section of 4" lead pipe is a toilet bend with inlets where the lav and tub entered the drain. Note the wiped joints where the pipes join. Even though the toilet's P-trap is in the china bowl the toilet bend is considered to be a trap arm because it is the horizontal pipe before the vent pipe. It is no longer legal to plumb drains into the toilet's trap arm so when this section was removed it became necessary to install a new drain fitting in the waste system for the lav and tub drains.

Chrome trap arms and tail pieces were soldered directly onto lead plumbing pipe. A wide flaring joint was formed at the surface of the wall or floor when this was done. So when you see a wide flaring solder joint with no visible brass fitting you may well have a lead drain. 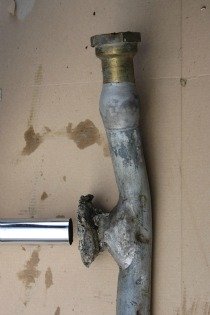 This is the best photo I have of a flaring solder joint at this time. The original trap arm is gone so I have placed one in the photo. Note the brass threaded adapter with its wiped joint at the top of the photo, this is where the galvanized vent pipe attached. The wiped joint behind the flared joint indicates that this was not a factory fitting, it was formed using two sections of lead pipe.

DO NOT attempt to remove the tubular brass trap arm or tail piece from a lead drain. It is not threaded. There is no thread, only a soldered joint onto the soft pipe.

Later the tub and lav were plumbed in iron, but the toilets 4” lead bend was used well into the 1940s, and is the reason for the front bolt-holes in a four bolt toilet. Because the lead wasn't “stout” enough to hold the toilet in place, studs were run into the floor though the front holes in the toilet base. 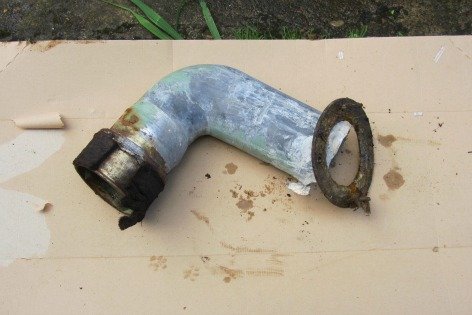 This lead toilet bend is shown with its brass toilet flange. The toilet studs are still in the flange. These flanges were soldered onto the lead pipe and, most times, nailed to the floor with two steel nails, but not always. It is common for these solder joints to fail as this one did. Sometimes the old brass flange is gone, having been tossed out with the old toilet. I have removed toilets that were lagged to the floor, wax sealed to the lead pipe, with no flange at all.

Lead was used to serve individual fixtures and small groups of fixtures, not the entire house. Lead drains always flow to cast iron drains. Lead will not solder to iron, so every lead system must have brass adapters to solder to. These adapters almost universally have six sides for the wrench used to tighten them, like the vent adapter above. The photo below shows a brass "ferrule" on the toilet bend. It was "calk jointed" into a 4" cast iron hub. You can see the poured lead joint and the oakum yarn. The oakum is driven into the joint with a yarning iron, and seals the joint. The lead holds the yarn in place and holds the joint rigid, it does not seal the joint. 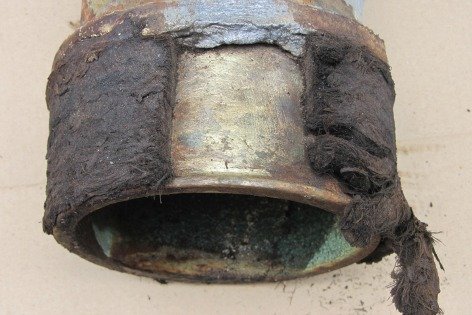 It's not a good idea to run a drain snake cable into a lead pipe because it is much too soft. But the good news is that lead pipe is a smooth wall pipe and so is difficult to clog. If you suspect you have a clogged pipe that is lead, be gentle.

The last time I saw a lead pipe drain that didn't drain it turned out to be full of Legos! Shampoo and toothpaste lids are a real problem in any pipe, but in lead drains... just keep those sink stoppers, cross bars and plungers, (the part that actually pops up in a pop-up), in place. “An ounce of prevention really is worth a pound of cure,” and much cheaper!