Clearing a clogged kitchen sink drain can be both difficult and messy. You're fighting accumulated food particles, fat, and soap. 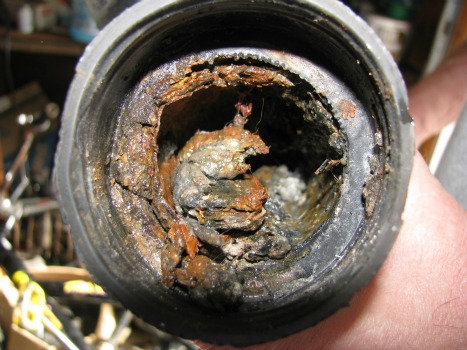 This is not a very badly clogged kitchen sink drain. 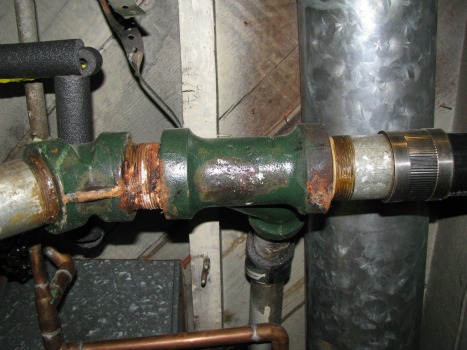 It was clogged long enough though to cause it to rot out the iron pipe.

If you don't have success clearing your clogged kitchen sink with hot water, you may have to snake it after all. A drain cable may pass along the bottom of the pipe, leaving a good deal of matter still stuck to the side walls.

One trick I use is to put a few kinks in the first few feet of cable. The bent cable scours the pipe as it turns and advances. A fully outfitted drain pro will use a water jet cable for this job.

Make sure the drain cable you are using is longer than the pipe to be cleared. Only going most of the way moves most of the debris down to one uncleared spot. The drain will be totally stopped, and you will be out looking for a more effective tool. Better you don't begin clearing the clogged sink drain till you have the right tool.

Wash the drain by flushing it with water after it is clear, and if possible while you withdraw the cable.

If your clogged kitchen sink drain has a dirty arm trap arm, you may be able to snake it from the roof. This keeps the mess outside, and lets you run water at the sink while you withdraw the cable, washing it and keeping the mess in the drain.

Snaking the drain from the roof will not clear the dirty arm itself as that approach bypasses it, so you may end up working in the cabinet anyway. The roof is a dangerous place to work. Anytime you get on a roof or use a ladder, you're making the job much more dangerous. I'm not qualified to instruct you on roof and ladder safety so I am not telling you to get on a ladder or a roof! Don't forget to account for the vent to the roof when estimating your cable length need. Is your cable length still long enough for the job?)

An iron dirty arm will eventually rot out in the wall, forcing you to open the wall and re-pipe it. So it may happen that you clear the iron dirty arm only to have it then leak into the wall, adding to your job, or even sending it to the contractor level.

Where (if any) are the clean-outs?

If the pipe is iron, an unwashed drain cable is going to bring up a lot of black goo. This is iron from the pipe walls mixed with the starch and fat that is now all over the cable. The iron that comes from a drain will stain just about any thing it can soak into, including your calluses.

Is your clogged kitchen sink a double-sided sink? And is it only draining on one side? Look for the fault in the tubular piping that joins the two sink basins. The set of fittings, nuts and washers that connect the two sinks is a "continuous waste". The tee fitting in a plastic continuous waste is bisected by a baffle. That's there to direct water down the drain.

The idea is to keep the water that's draining from one basin, from coming up in the other basin, which would be a sanitation issue. But the baffle reduces each side of the drain to only half of its normal size.

Typically the side that's plugged is the garbage disposer side, and it is plugged with some stringy item that should not have been put in the disposer in the first place.

Set a dish pan under the drain assembly and remove first the J-bend of the P-trap, and then the continuous waste tee. Clear the tee and run a little water to check for other obstructions. Wipe the parts off with a towel and reassemble.

This is a good place to add this tip. The nylon washers that seal the joints of tubular drains may be “weepy” when new, especially if the tubular parts have extrusion seams. When I install new drain parts I coat the washers with a thin film of toilet wax. This works much better than tightening the nuts till they crack.

Back to Clogged Drains