It is long past time to expand my on line portfolio to include some of the projects of this past year, 2014. This Hoffmann & Billings standing waste restoration was neither the most difficult nor the least complete project to arrive on my porch. It did however take longer than any other so far. That is except for my own Taft tub that I can never find time for. The reasons for the protracted completion time are numerous, There were delays in shipping, parts fabrication, plating, and parts acquisition. Communication at least was not a problem, there were about fifty emails sent and received along the way. I want to take a run through it and tell you how it went. Normally I would place this kind of information on my blog but I feel that certain projects deserve a more prominent form of display. This is one of them. 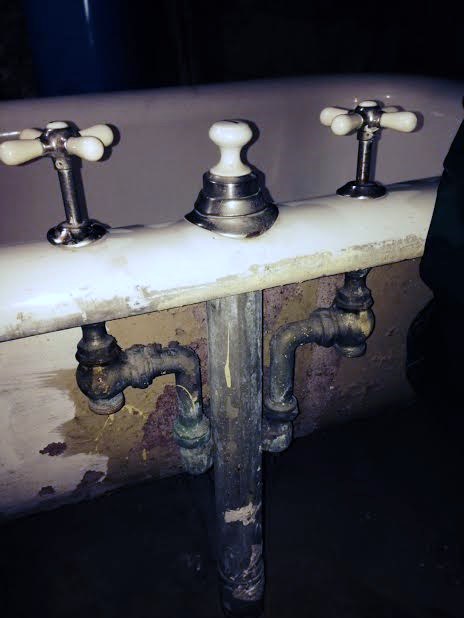 For these "on the fixture" before photos I must rely on the client. Sometimes I get lucky and end up with fairly good photos, like this shot. Here you see a through the rim standing waste set into the side of the tub. I always like to see a tub with two back rests, the side mount valve gives that advantage plus a balanced perspective in most cases. 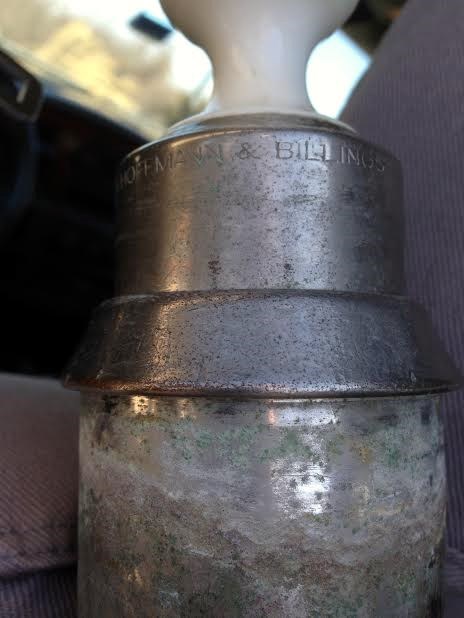 I don't see a lot of Hoffmann & Billings. Here is the typical place to look for a manufacturer's name. 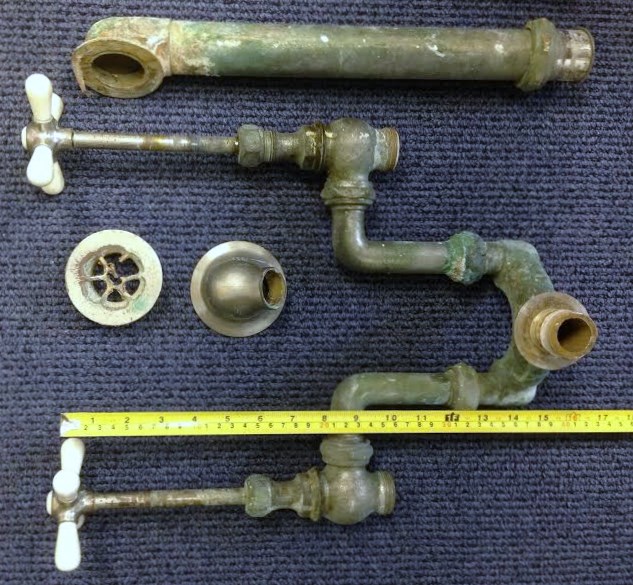 Missing from this set are the two supply risers, the two union halves that had topped the supply risers, and the two nuts that secured the risers to the valves. Because I acquire partial and orphaned sets I had a pair of valves on hand that I could steal parts from. I provided original union halves and nuts from my stock.

Damaged parts include not only the obviously torn drain strainer. The strainer did not want to unthread from the drain boot so a saw was used to remove it. Look closely at the drain boot and you will not only see the peel of brass that came up when the saw cut off true, you will see the remnant of the strainer thread still in the boot. A new boot and strainer had to be used. Unfortunately i did not have an identical strainer but the one I used had the proper thread size and pitch so that if an original should become available it could be swapped in without replacing the boot as well.

The boot I used also had the same offset as the original, It had to in order to insure the tower drain tubes would sit where they were intended to.

Lastly, the long horizontal tailpiece attached to the boot was split and unusable. I would have to use a new section of 1-1/2" OD brass  but it needed to be13 inches long. The standard long tube is 12". I was able though, after a long search, to find a manufacturer that sold an 18" section. 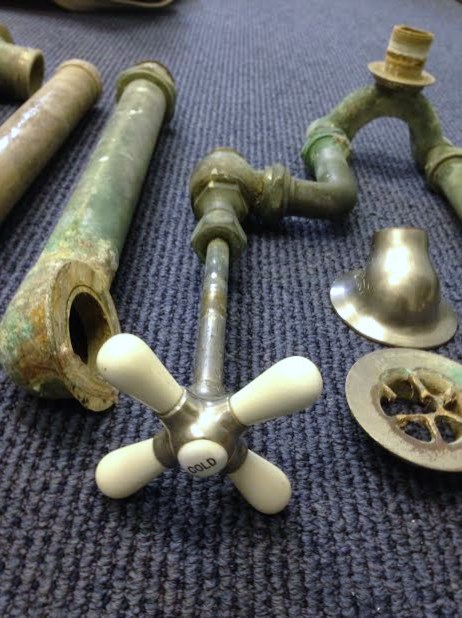 Still looking at the client's before photos. I usually advise clients to not send their porcelain handles. You will notice my temporary handles in all of the after photos. I used them when I water tested the valves and did not remove them till I was ready to ship the assembly home.

The open top of the inner tube where the threaded rod connects is the overflow port when filling the tub.

All of the heavy tarnish, built up lime, old plumbers putty and old thread seal was cleaned off of not only the surfaces but all of the male and female threads by me.

In the yellow tape on the near valve stem are the two new set screws for the original handles. The remnants of the old set screws had to be teased out of the stems.

Note the motif of the valve nuts and how the nuts on the drain tee also match. 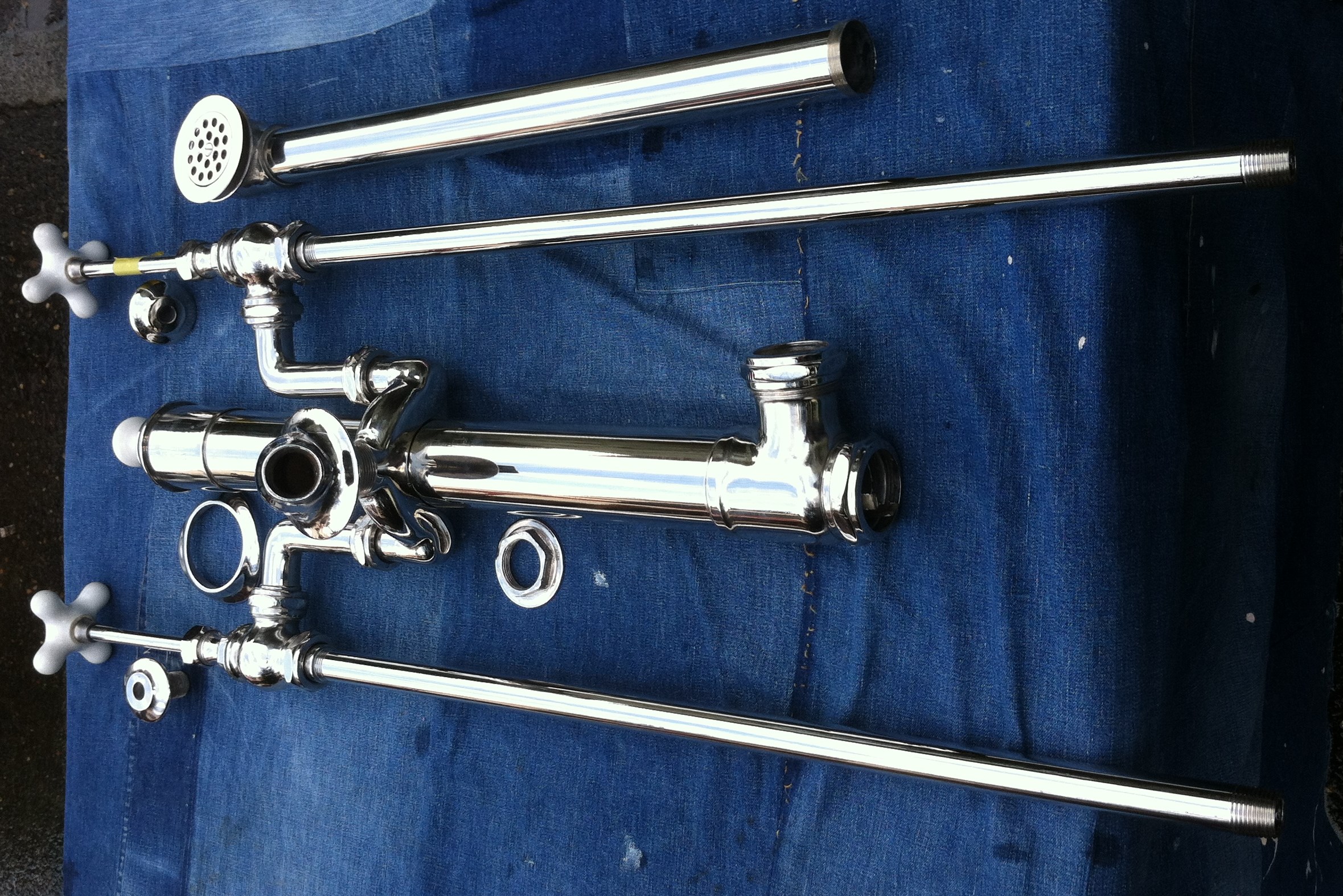 Not only do I have a source for 18" threaded tubular brass, I can get 1/2" and 3/4" threaded brass nipples up to 24" in length. From them I made these new supply risers. 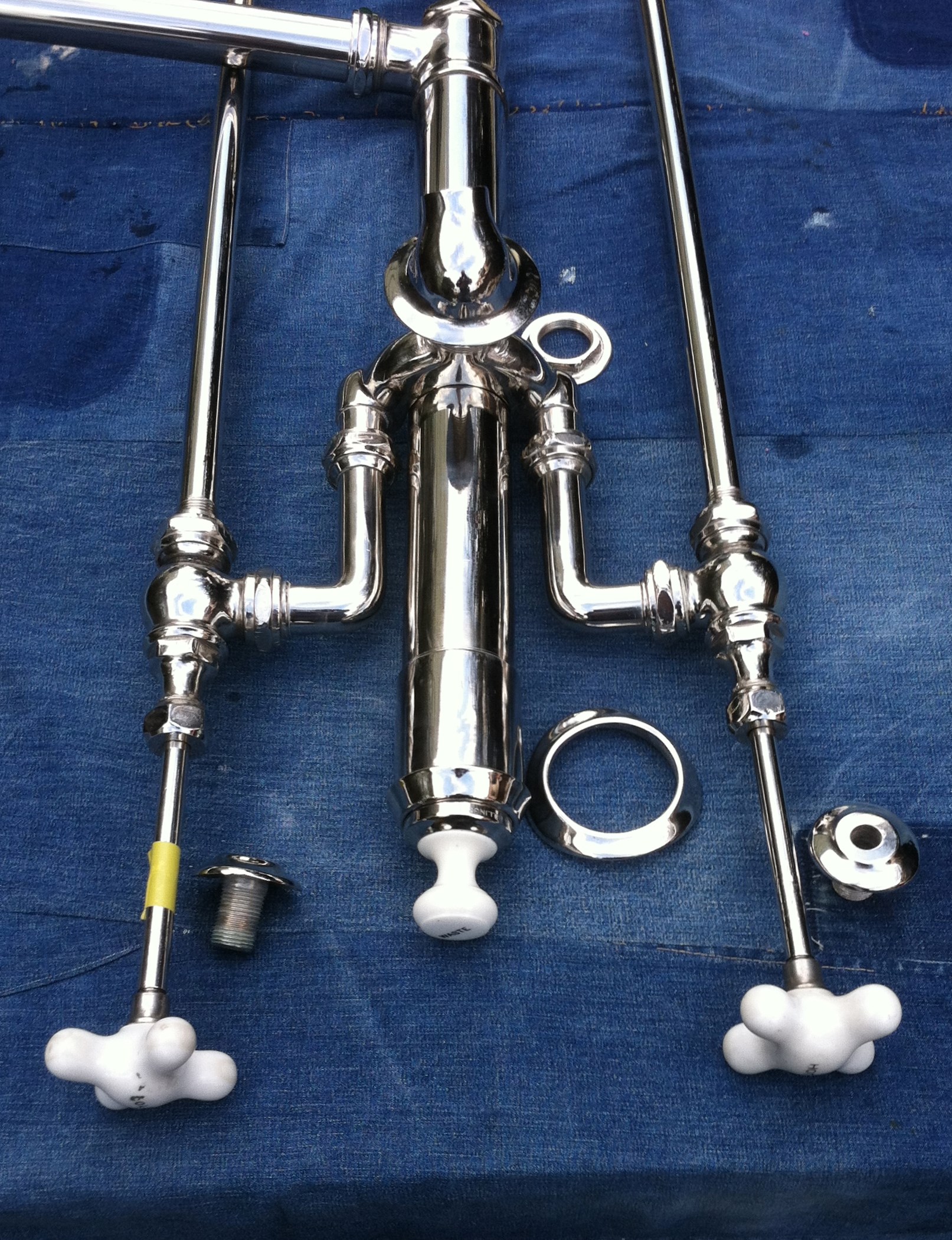 The valves have new replaceable faucet seats threaded into them of course. All of the parts are now working perfectly, I cut the new bib washers from my stock, I made the various gaskets, and I even make my own packing string.

There were surprisingly few wrench scars on the set. Most of the scars that were there buffed out and I did fill a few before plating. 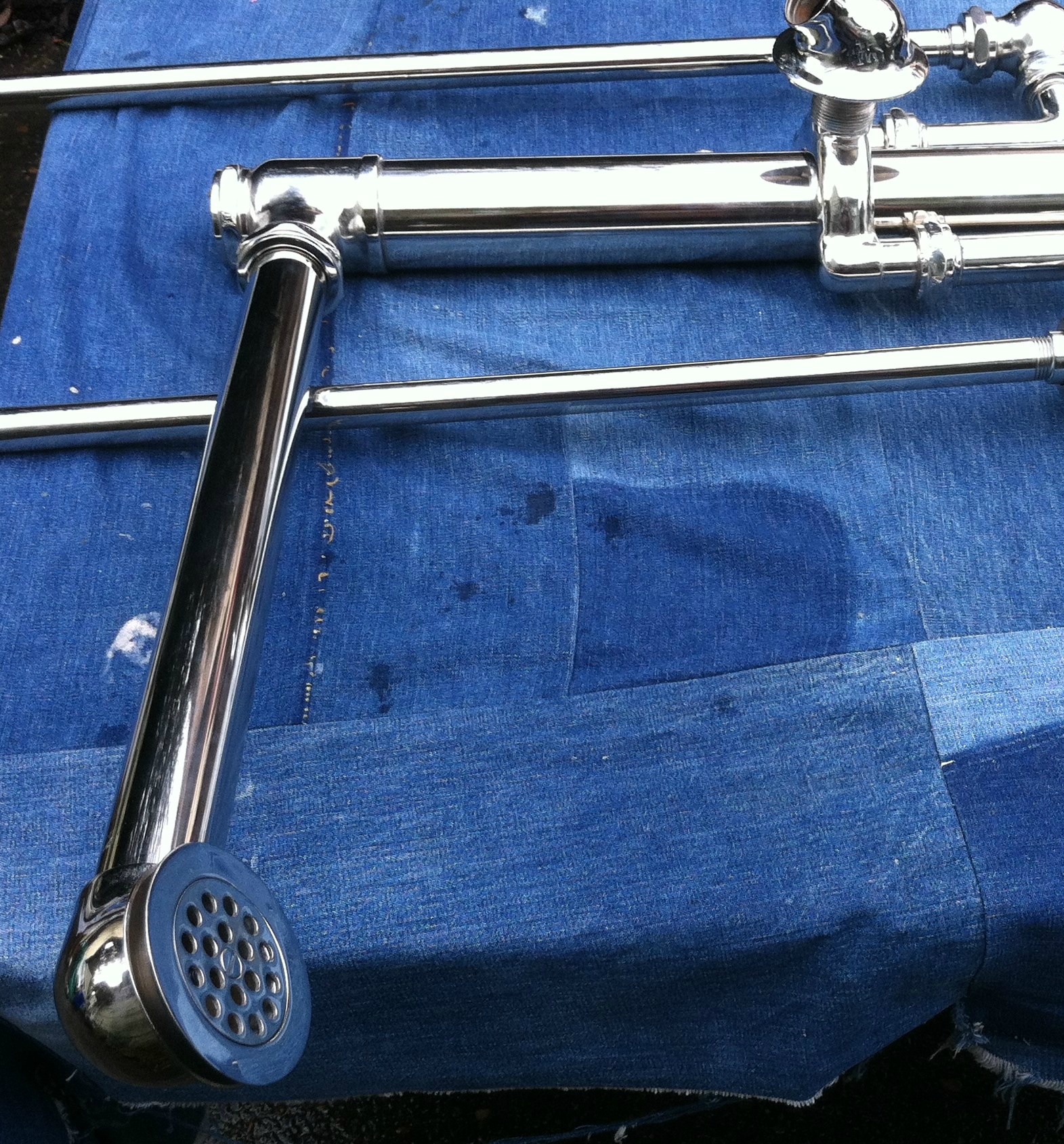 While the drain strainer is not everything I wanted it to be, the boot did buff out nicely and the strainer is cast brass.

Home from Hoffmann and Billings